While back, just before I started this blog, my worst nightmare was when someone asked me ” so what exactly is wrong with S.?”.

And I mean after the stage when I couldn’t even open my mouth to answer because I burst in tears, and after next one when I kinda wanted to answer but didn’t know how, because I didn’t completely understand what was happening .

I’m talking about time when I knew exactly whats happening and I was ready to speak about it. (About the same time when I came up with idea for this blog 😉 ).

So back then I did something super stupid.

Utterly stupid…namely: I started to tell all story. That S. was born with cloaca and then explaining what it actually means….to everyone. sometimes strangers (*didn’t happen too many times, handful of times ).

Once I was telling my “friends” all that and even more intime parts and about my fears and I look at their faces and I caught myself ” No, I don’t wanna share all of this to someone who looks between confused and disgussed or even uninterested. That was a last time I did it.

First of all I realised I don’t feel comfortable to do it.

Too many details when people don’t even wanna know, or maybe some of them do but its so complicated its hard to imagine and understand the complicity of this rare condition.

And secondly and more important : Its not my choice whom to tell this story – my child will decide one day who she wanna tell.

Someone might say – yeah and you started a blog about it… Yes I did.

BUT I’m doing it under nickname, and I never post any pictures of S. or spare details that might link to her. Plus if one day she ask me why I did it , I will explain why.

To raise awareness, and to help parents who are on the start of their journey, who came the same rough path as we did, to explain what it means and to give them hope. But if she would still like me to remove it – I will.

Before the website went live I did think a lot about it- especially about… what if, when S. is a teenager and asks me (for example) “why the hell did you share my intimate story with the whole world??” and I nearly gave up.

But then I spoke to one of the girls born with cloaca who was then 20 years old. And asked her how would she feel about it if her mum did such a thing. She told me she would be very proud, knowing her mum did everything she could to help others,and she added- “as long as you never mention anything that could get linked back to your daughter until she is ready then I think she will only respect you for doing it“.

Plus, I would hope that by the time people are asking S. questions and she’s answering them herself, that we would have prepared her in such a way that she is comfortable and confident about her self as a cloaca survivor and educated as much as possible about it, to be happy to answer and educate others without feeling abnormal or different in anyway. So I decide to do it, but I only give information in a way that also keeps my child’s identity private.

That was a lesson.

When it comes to telling strangers, I choose what to say to whom.

Sometimes I give a short answer like “her kidneys are damaged and she needs a bit of extra care”.

And I don’t go into details. Unless someone ask what’s involved in care then I just say “She needs to be catheterised 5 times a day and take some medicine to protect the kidneys from infections to avoid further damage.”

To people I know, I did mention that “she was born with cloaca – and it means she had one common channel for bladder, bowl and vagina and IA, and kidney problems.”

Although I did notice that some people looked uncomfortable after hearing this (could it be the Vagina word? 🙂 ).

When she had a stoma I used to say “bowel problems “.

Anyway – key is to come up with some generic answers like “kidney issues”. With colostomy, depending on situation, you can say “bowel problems” and don’t go into detail or “stomach issues” , and let them think what they want 😉

I really hope this note will help someone.

It took me while to write it, as I thought of all approaches to the case.

I understand parents who worry that they have shared too much about their kids. And they only talk about it on some bowel support group pages.

I know they appreciated being able to talk to other parents, who have been a helpful source of information but out of respect for kids, won’t tell anyone else unless they absolutely have to, like teachers for example.

I feel the opposite to them. I feel we need to be more open about this.

Our kids should be proud of who they are.

The more open we are the more it will be accepted.

I’m worrying how is it going to be when S. will finish preschool and go to school. I’m fully aware that kids can be cruel and I do worry how S. will handle possible bullies. I just hope – and still have time to prepare her to it – that she will be strong and confident.

She is a girl who happened to be born with cloaca but it doesn’t make her less valuable person.

I truly believe its up to parents how kid will be thinking of themself,

not through the prism of the condition they were born with.

On the same note I don’t shout it from the rooftops. I do think though it is up to us parents to change people attitudes in the same way as parents of children living with down syndrome had to battle to make their children accepted. Our children are who they are, why hide it? Bring them up to stand up to bullies and be proud of who they are.

I really hope I am doing the right thing and one day S. will feel proud of who she is. It will be up to her though whether she wants to tell strangers and that in the future to raise awareness. She will always have our support.

As parents its so hard as we only want the best for child – but at the end of the day it is their condition.

Its their story to tell not ours.

We struggle in caring for them I am more than aware, but take care not to be blinded by the ‘I’m struggling’ so much that you miss what’s actually happening to your child. 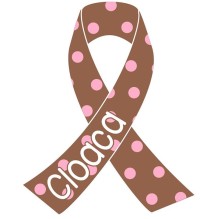